Today we truly embraced being Dutch. (Good thing, since we are!) The Netherlands has amazing infrastructure built for bikes.  There are well-signed, bike “highways” around the country. Before leaving the U.S., I’d downloaded biking map

The first ten kilometers of our ride were truly glorious. We biked on a dike along the sea through folds of sheep, literally grazing on either side of us. Then the path took us through fields of wheat and up and over irrigation canals. The Dutch have these bridges with built-in channels for your bike tires. And of course, it’s flat, so the biking is easy.

That is, until you get hungry – more preciously until Aidan gets hungry. I had packed water in our daypacks (and we had our iPads, iPhone, and camera – which we don’t leave anywhere for security reasons – and layers of clothes that we peeled off during the ride), but no snacks. Such a rookie mom mistake! Long story short, 20 kilometers and six villages later, we still had not found an open restaurant/cafe/grocery store. Toward the end, I did find a hardware store that sold Mars ice cream bars and droop, a Dutch candy. But we were still hungry, and now thirsty.

The lack of tourist services (granted, we weren’t in a tourist area) continued when we rode up to the train station in Uithuizermeeden (try pronouncing that name!). There was no ticket attendant like the other stations that we’ve been to, only machines that took chipped-credit cards or coin Euros. I had bills. Back on the bikes, we searched for a place to get change. The grocery store clerk refused, saying they have to go to the bank and pay for their Euro coins (whatever that means) and that there were no other businesses in the area to try. Back to the train station, I decided to board the train without tickets. Of course, Aidan now thinking that we’ll be prosecuted and sent to jail! And yes, we got caught two stops from our destination by the train conductor. I told him our tale, and he understood enough to let us off the hook and pay when we arrived in Groningen. No jail today.

But when you do, be more prepared than us!

In all, we biked 20 miles. The biking itself was really enjoyable; the accompanying drama (which all could have been resolved with three Cliff Bars, three extra bottles of water and some change) was not. By the way, we did visit three cemeteries in our travels but didn’t find any dead relatives.

Tonight, our butts are sore! 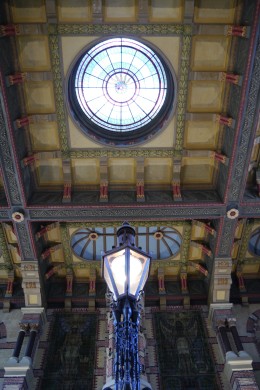 The train stations – even in smaller towns – are really ornate in Europe.

Waiting for our train to Delfzijl

Aidan and Nathan along the Waddenzee 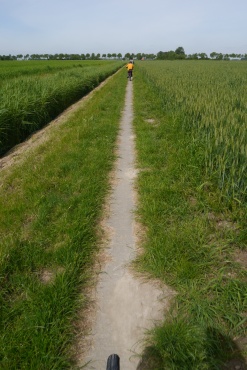 Biking through the wheat fields 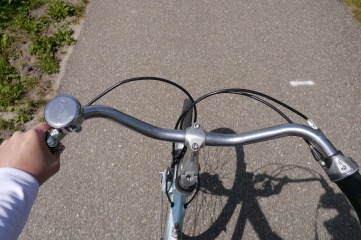 Yes, I can ride and take photos at the same time! 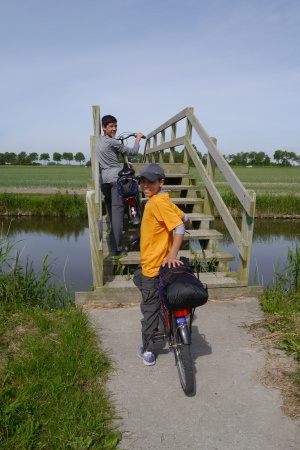 You can’t see it in this photo, but there’s a nifty tire channel on the bridge to help get your bike over.

Nathan riding along in the polders 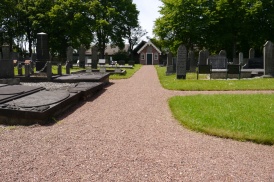 Biking through the Dutch countryside