We’re in French Polynesia, a overseas collectivity of France in the South Pacific. French Polynesia is made up of several island groups. The Society Islands include Tahiti, Moorea, Bora Bora, and 11 others. After a brief stay in Tahiti, we’ll be headed to Moorea. (If you watched the last season of Amazing Race, it’s where the contestants skydived.)

You may be asking why this stop is on our itinerary. Yes, it’s perfect darn close to paradise and the most remote place that we’ve ever been. It’s because these islands are so difficult to get to that we included them. Since we’re traveling on the Star Alliance round-the-world ticket (on reward miles), we wanted to max it out. For us to fly here on our own some other time would cost a small fortune.

Of course, there’s a downside to paradise. It’s incredibly expensive. (Maybe we’re more price-sensitive having just come from Cambodia.) For example, our dinner at the Roulettes, Tahiti’s version of food carts, was $52! Fortunately, our stay at the Hilton Moorea Lagoon Resort and Spa will be partly on reward points. It’s the reason that we’ve broken our “no chain hotels” rule.

But before heading to Moorea, we did what Tahitians do… surf. Our instructor, Michel Demont, is a former Tahitian and European champion surfer and is currently a coach for Tahitian Selection Team (ages 16-18). The kids did really well for their first time!

From Nathan: The sand on the beach was black, and the water was cold. It took me a few tries to get up. You had to have a wide and balanced stance; otherwise you would fall off. I didn’t like falling and getting salt water in my mouth. The water wasn’t very appetizing. I hope that we can surf again!

From Aidan: Surfing was very fun. I was the first to stand up and the first to ride the wave in all the way to the beach. The waves were small, but once in a while, we got a big one. One time, I was swimming out, and a huge wave came and crushed me. I fell off my board and did a somersault. Surfing was awesome!

The grown-ups did not fare as well. Neerav could get on his feet but couldn’t find his balance. I could balance but couldn’t get from my belly to my feet quickly enough. I only managed to knee surf. It was downright pathetic!

Spin class in the pool at Hotel Tahiti Nui

Michel instructs us on the correct stance.

Aidan hops on the board.

Michel corrects Aidan’s stance. You need the arms for balance. 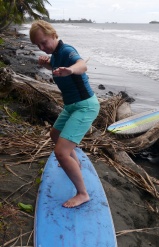 This was the only time Shellie actually stood up on her board!

That’s Aidan in all those whitecaps. 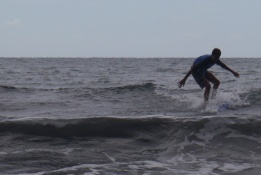 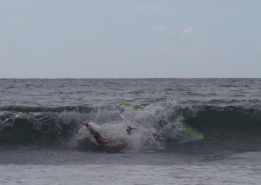 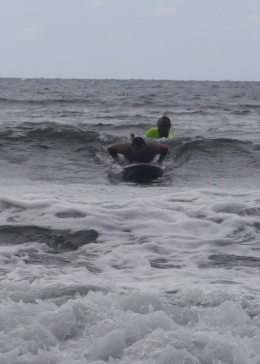 Jump up… jump up 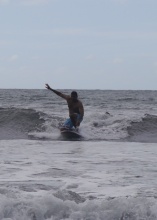 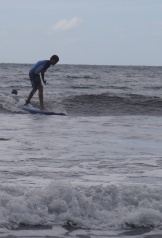 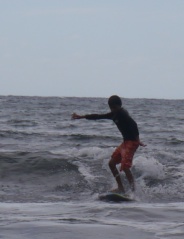 Way to hang on, Aidan. 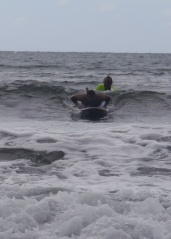 You can do it! Stand up! 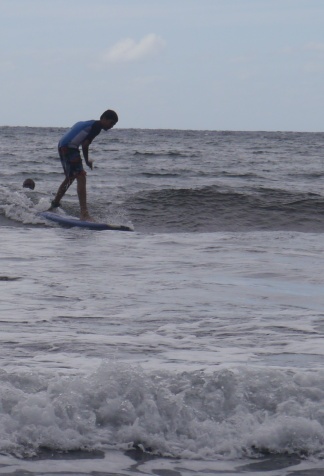 Nathan’s seems to be a natural.

Nathan rides his wave all the way to the shore.

Aidan looking good on his board

Shellie waiting for her wave 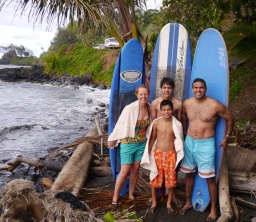 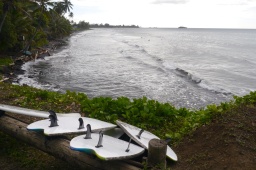 One of several cruise ships in harbor

Roulettes, or food carts, in Papeete

Pig on a stick at Roulettes

Dinner at the Creperie

Aidan votes the crepe at the Roulettes the best of the trip!

Aidan gets a ride from Daddy

Sliver of moon over Tahiti