I was already on guard against tuk-tuk drivers. (A tuk-tuk is part motorcycle, part golf cart, and a favorite mode of transportation for tourists in Southeast Asia.) On our ride from the airport to the hotel – before I had a full grasp of the currency exchange rate – we were majorly overcharged by a tuk-tuk driver.

This morning, we were walking to the Grand Palace and Wat Pho in the touristy area of Bangkok. A few blocks before we got there, we stopped to check the map.  A “helpful” Thai man approached to give us directions. He also mentioned that the Grand Palace and Wat Pho (temple) were not open to foreign tourists until 1 p.m., as it was Sunday and only Thais were allowed in to worship. Despite having checked the hours online and recording them in my notes, I believed him. Big mistake.

Since we now had three hours to kill, he suggested visiting some of the other wats and Buddhas in the area, plus a Thai silk and gem showroom. He said that admission was free today and that the tuk-tuk ride would only be 20 Baht (less than a $1) because it was subsidized by the government on Sundays to encourage tourism. As I write this, it sounds absolutely absurd; it seemed a lot more plausible in broken English. Unfortunately, we bit.

We spent the next three hours visiting wats of little interest. The Thai silk showroom ended up being a custom clothing store. Again, unfortunately, we ended up spending some money there. As we requested, the driver dropped us off at a Thai massage school near Wat Po. (That was the best deal of the day: 1/2 hour Thai massage for $6.) We then headed to the Reclining Buddha at Wat Po, our original destination. A few blocks away, we were approached by another Thai man, saying that the Wat Po was closed for a religious holiday this afternoon, but we could visit some other wats and the Thai silk showroom. Ahhhhh… it suddenly became apparent how utterly stupid we had been. That was the real scam. The tuk-tuk drivers get gas vouchers from the businesses.

If I hadn’t been so angry, the whole situation would have struck me as funny. My whole career centers on helping viewers spot and avoid scams, and we got took. Ugh! 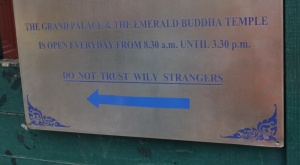 Wish we would have seen this sign 3 hours earlier.

I hate to approach travel in this way, but there are enough scams out there to warrant the warning.

Travel Tip 36: Bargain for nearly everything.

With the exception of food in restaurants, we’ve found that you can bargain for hotel rooms, spa services, entertainment, clothing, and souvenirs. Whatever price you’re quoted, offer half and then let the bargaining begin. At first, it’s fun. But after awhile, it’s exhausting. You’re always left wondering if you got a good deal.

In the evening, we went to a Muay Thai Boxing competition. Muay Thai is like kickboxing; it’s Thailand’s national sport. It’s not my cup of tea, but I agreed to do it for the boys.

Ignore the travel guides’ advice about attending a Muay Thai competition. The bouts were lame. They seemed like they were set up more for tourists than the Thai people. Foreigners couldn’t buy the cheap tickets; they were required to buy ringside. It was a total racket.

We’re glad to be leaving Bangkok. Two days here was plenty. The Thai experience that we’re seeking is not here. 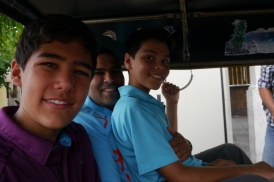 Yes, we can fit 4 people in one tuk-tuk!

Tuk-tuk driver who was part of the scam 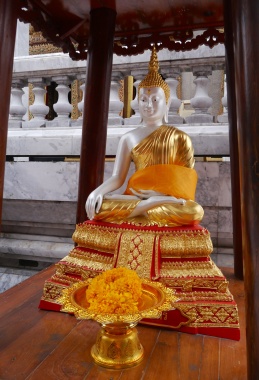 One of many altars near Standing Buddha 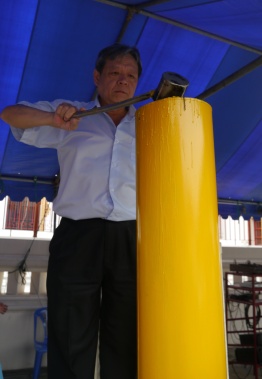 Had to take a photo… we were color-coordinated with the monk.

This man was very gracious, explaining to us more about the Buddhist ceremonies and traditions. 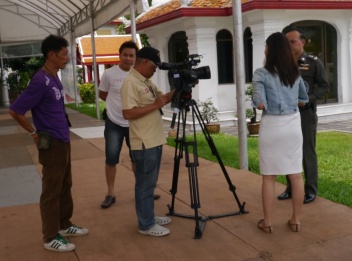 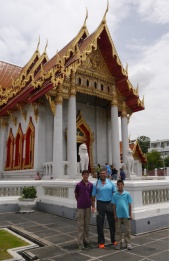 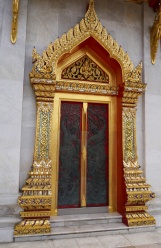 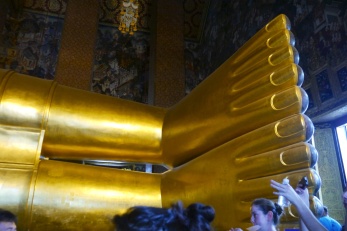 Those are big feet! 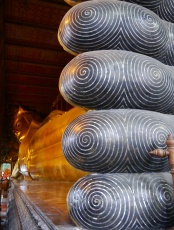 The Reclining Buddha measures 150-feet long. The spirals on the toes are made from Mother of Pearl. 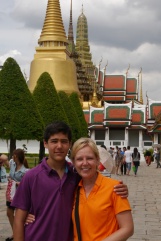 Nathan and Shellie at Grand Palace

Neerav and Aidan outside Grand Palace

We’re ringside, not by choice. The promoter won’t sell the cheap seats to foreigners.

Muay Thai is similar to kickboxing.

Boxer in red shorts goes down.

He’s down. Bout over.

The boxer’s coaches and boosters are boisterous.

They soak these guys with water between rounds. 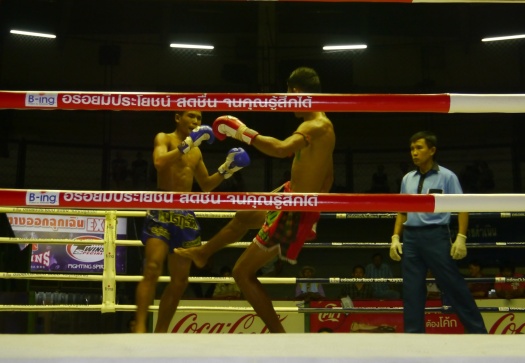 Watch where you’re putting that foot!