Today, we were camera-toting tourists.

From Nathan: Swayambhunath, also known as the Monkey Temple, is a religious place for both Buddhists and Hindus. The temple gets its name from the many red monkeys climbing all of the buildings and stupas. The monkeys sometimes take the food offerings.

Aidan, Shellie, and Nathan in front of Swayambhunath

Aidan tries to get coin in pot so that his wish comes true. Didn’t happen.

Swayambhunath, also known as the Monkey Temple, in Kathmandu

The reason that this place is called the Monkey Temple 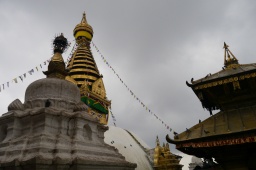 On the left, you still the gold top of the stupa; on the right, you see the top of the Hindu temple.

Worshippers at Hindu temple at Swayambhunath

If a Buddhist commits a serious sin, they may circle the stupa 108 times, spinning the prayer wheels as they go, in hopes of forgiveness. 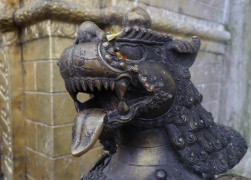 Red monkeys grooming each other

From Nathan: Next, we saw Durbar Square, the oldest area of Kathmandu. One of the main buildings was once a palace for the kings of Nepal. It reminded me of the Forbidden City in Beijing, but not as well constructed and not as big. 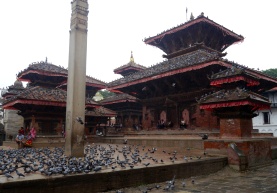 Part of Durbar Square, the oldest area in Kathmandu and an UNESCO World Heritage Site

The Kumari appeared at this center window a few minutes earlier; however you’re not allowed to photograph the girl.

Home of the Kumari, a young girl who is chosen to represent the Living God until she is 18 years old. Then a new Kumari is selected. 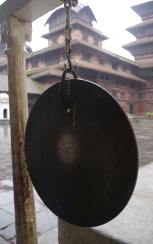 Two different styles of palace buildings, each built by a different king 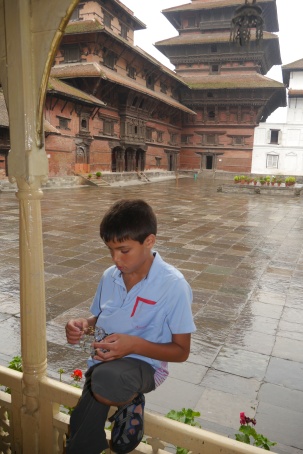 Aidan is more focused on his new toy that he bought from a street vendor than the guide’s lecture.

The toy folds into different shapes. 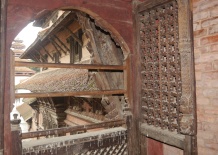 From top of palace, Aidan points to Monkey Temple in the distance.

Another view of palace courtyard 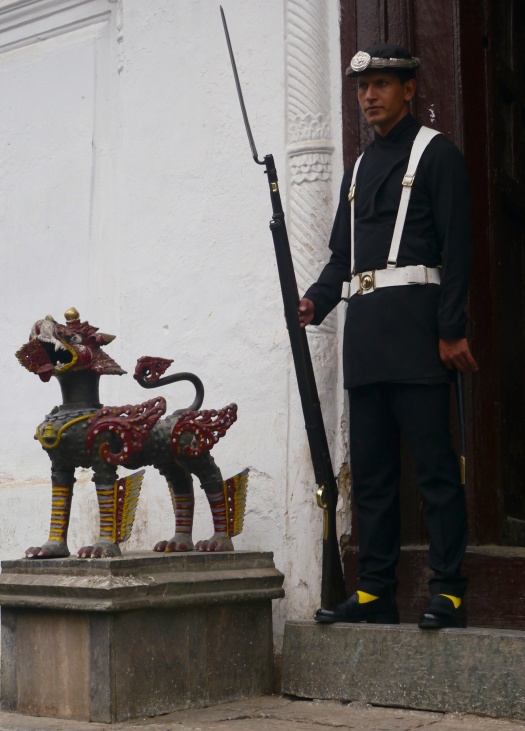 Nepal was never colonized by British, thanks to the Gurkhas and this weapon.

From Nathan: Finally, we went to the biggest Buddhist stupa in Asia, the Boudhanath. We saw artists making mandalas. The designs were very small and complex. The artists only use brushes with a few hairs. It takes 10 years of training to become a master. They must have a lot of patience to take the time to put in the delicate decorations. One small painting can take a month to complete.

Shellie, Aidan, and Nathan at Boudhanath

Doorbells to the gods 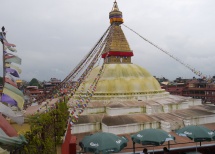 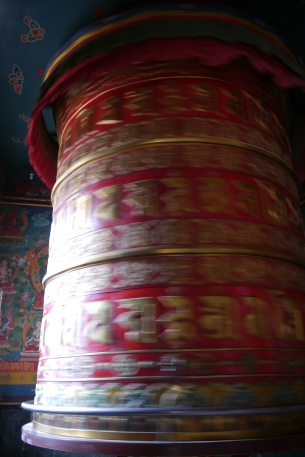 Our guide, Vijay, explains the Buddhist and Hindu views of reincarnation using this circle.

This woman will slide on this board 108 times, reciting her prayers. 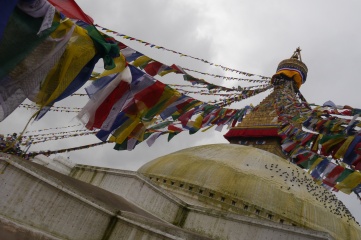 The Master applies gold leaf. The painting has such fine detail. 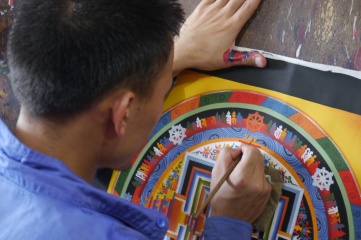 An artist may use a brush with only one or two hairs to do the detail work.

Tonight, we were treated to a Nepalese dinner, complete with traditional music and dancing by Outshine Adventure’s director, Gokul Sapkota.  Despite the unfortunate circumstances of our trip – Aidan’s illness, the abandoned trek, and no mountain sightings – Gokul and his team have been flexible and provided great service.  We highly recommend the company.

Travel Tip 34:  When it comes to trekking, timing is everything.

Because of our overall trip itinerary, we had to come to Nepal in July.  You shouldn’t.  The best time to plan a trek is September or October.  Yes, it’s high season, and yes, you’ll pay a little more, but to come all the way to Nepal and not see the Himalayas because of monsoon rains is a shame.  And before committing to a trek, be sure that you’re both physically and mentally prepared.

Nepal is a culturally-rich destination with breathtaking scenery.  Once you get here, it’s very affordable.  Best of all, the people are eager to share their country and its mountains with you.