Our host, Steve, was so kind to take the day off work and drive us to Stonehenge about an hour and a half outside of London. The ancient stone circles are thought to have evolved between 3000 B.C. and 1600 B.C.   Both their purpose and just how they got to this location are still a mystery. The inner circle stones are Bluestones from Wales, some 250 miles away. Each weighs the equivalent on seven elephants. One third of each stone is actually buried below ground.

Prehistoric man and physics – it’s a puzzler! Of course, legends offer other explanations – the work of the Devil, the magic of Merlin, and the doings of aliens.

From Nathan:  There are different theories about the purpose of the rocks.  One of things the rocks could have been used for is to identify the month.  They also could have been a religious site.  Whatever the reason, Stonehenge is breathtaking.

The kids really enjoyed Stonehenge. It was outside, and even though it had an audio tour (Nathan doesn’t like audio tours!), it only lasted 20 minutes.

Stonehenge is one of several World Heritage sites that we hope to see on our trip.

The audio tour is included at Stonehenge. It helps to explain what you’re looking at… they’re not just rocks!

Hard to believe that this rock formation has been standing here since prehistoric times, as early as 3000 B.C. 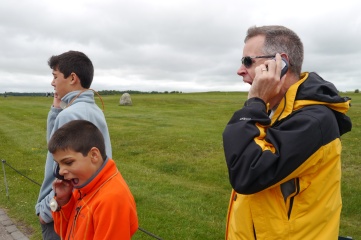 OK, this was funny. No one was bored by Stonehenge, but I caught Aidan and Steve yawning at the same moment.

Each large rock weighs the equivalent of seven elephants!

There’s something very eerie and mysterious about circling Stonehenge.

Henge means hanging, so these are the “Hanging Stones.”

Nathan taking it all in

There are small mounds around Stonehenge where human remains have been found.

Only two-thirds of each stone is visible. The rest is underground.

Aidan, Nathan, and Shellie at Stonehenge.

Two of the four original Station Stones remain. The four Station Stones formed a perfect rectangle. The Altar Stone sits at the intersection of the two diagonals.

How did they ever lift those rocks on top of the pillar rocks?

Another view of the Station Stone to the left.

Stonehenge is surrounded by the beautiful English countryside. That’s fields of goldenrod in the background.