I’ll make this brief as I’ve now been up for 36 hours straight.  Somehow that “sleep on the plane” bit never really happened.  The boys were so tired tonight that they literally fell asleep before their heads hit the pillow!

We safely arrived in London and were greeted by our dear friends, the Larsons – Nancy, Steve, Anders, and Jonas.  They are Portlanders living in London on a temporary work assignment.  They’ve been so kind to put us up at their home in the Kensington-Notting Hill area.

Today, the Larsons played guides and gave us an overview in a walking/double-decker bus tour: Hyde Park, Kensington Palace and Gardens, Piccadilly Circus, Harrods, and St. Paul’s Cathedral.  The sun was shining; London was bustling.

If you visit London, an Oyster Card is the most economical way to travel between the city sights either by city bus or the subway, called the Tube.  You simply load money on to the card or set it to top off automatically.  There are child discounts.

The boys’ favorite part:  walking to a nearby neighborhood park and playing soccer…. make that football!

Nancy and Anders as our welcoming party, complete with sign.

Nathan calls these giant “gumdrop” trees outside Kensington Palace. No sighting of William and Kate.

Celebrating the Queen’s 60 years as monarch. 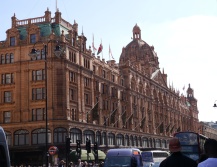 Harrods… beyond my price range.

St. Paul’s Catherdral, one of the only structures to survive the London Fire of 1666.